One of my Math groups is currently learning to join and separate sets. This has been a long and drawn out process for them, as it has been addressed in many formats over their schooling history.

My challenge was to find equipment that would capture their interest and imaginations. I wanted them to be enthusiastic about Math! To want to do Math in their spare time!

One student is a little girl who loves sparkly, fluffy things. You know the type, I bet you have one in your own class right now.

During a standard trip to the dollar shop I found some awesome plastic crystals. I think that they are used as decorative centerpieces, and in vases etc. I snapped up two packets (in green and blue, that way they can be used for pattern activities later). The crystals became 'diamonds' and are stored with some pictures of pirate treasure boxes, and my students LOVE them! Especially if I use a pirate voice when making the questions! Since taking this photo, I found that these guys have difficulty manipulating materials. To keep their equipment all in one place I have glued the treasure boxes onto small paper side plates. It really helped! 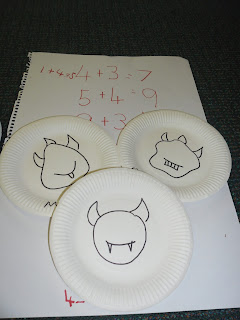 My second 'win' has been paper plate monsters. I drew blank monster outlines onto more paper plates, and each student gets a monster. We then 'grow' (add) googly eyes to our monsters (your monster has 4 eyes. He grows 3 more eyes. How many does he have now?). We also 'shut' (subtract) eyes from our monsters (your monster has 7 eyes and she closes 3 eyes, how many does she have now?). This has been a hit with the group again, and I hope that it is a hit with your own class! 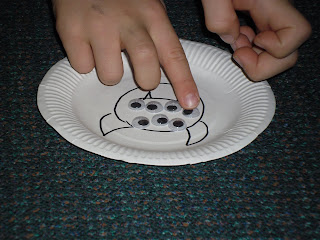