I was cleaning out some files today and found some pictures I meant to post last year. I can't even remember what we were studying at the time... but I do remember that this was a spontaneous art lesson that linked in beautifully. I think we had been looking at brush techniques and a reliever had been doing pencil sketched studies of cut kiwifruit with the class. 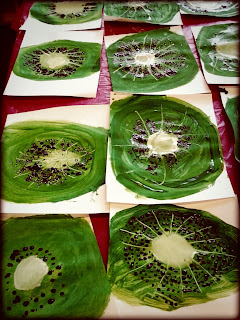 We roughly mixed a couple of shades of green to make a massive swirl on the page. The bigger, the better. The idea was to not load the brush up too much- otherwise it ends up a mess. We then did a second swirl of white in the centre. Brushes were flipped upside down and we dragged the end through the white paint and outwards to create the lines. Lastly, we dipped the ends in black paint and dotted seeds. 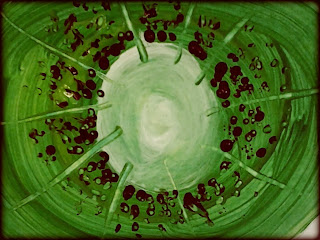 Posted by MissEdwards at 8:33 PM No comments:

Email ThisBlogThis!Share to TwitterShare to FacebookShare to Pinterest
Labels: art

This term our focus for Te Reo is Greetings. So I just had to share a set of basic greetings posters that I made for my classroom. There is a huge deficit of free Maori printables out there... so hopefully this is one step in the right direction! You can access the documents from my Google Drive here. 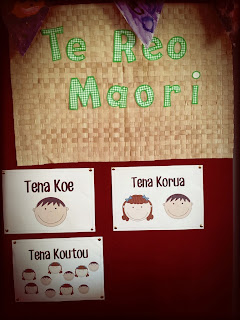 Posted by MissEdwards at 11:23 PM No comments:

So, so happy with the final results of our beginning of the year, class collaborative art projects! Clap along if you feel that this is a craft for you. Day one we began to create some class bunting. I already had crochet bunting hanging in the classroom, so we have a bit of a theme going on. I made a triangle template and traced out 24 triangles onto fabric. These were roughly cut out, so that I could name them on the outside of the triangle and be able to read it clearly. We put the traced side down on the table (so that I had clear cutting lines later) and we talked about not mixing colours, background/foreground and bright/interesting colours. The children painted self portraits in any old colours they choose. I limited their colour palettes to bright tones. 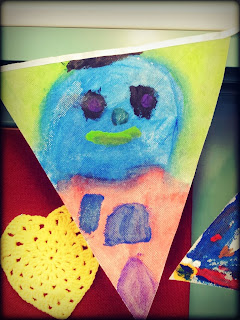 Day One we painted basic shapes- head, shoulders, background. Day Two we added detail. Day Three we added further detail if needed. I took the triangles home to cut and assemble. Each 'flag' was cut out and re-named on the bag. I ran a thin strip of hot glue across the top and attached a long piece of ribbon to make a class bunting. 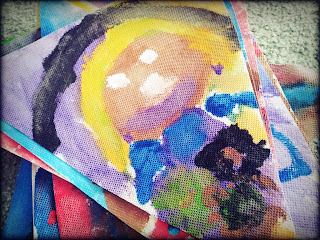 The crochet bunting has been ripped down from the back wall, and this one now hangs pride of place, directly underneath our collaborative treaty. 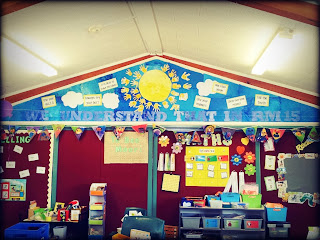 Just gorgeous. And a nice twist on a classic self portrait. Now, to find a home for my old bunting...
Posted by MissEdwards at 10:55 PM No comments:

I am IN LOVE with Pintrest. Not only is it the world's best time-waster, it is the world's best source of teacher inspiration. I spend a lot of time on Pintrest and gather a lot of resources and inspiration. This is now working particularly well for me as our school administrator has allowed access to Pintrest at school, so I am finally able to print things direct from my boards! If you are interested in getting started, and want to see what I am pinning, you can find my boards here: http://www.pinterest.com/shannane/. You might want to take a packed lunch. It is truly addictive.
Posted by MissEdwards at 8:56 PM No comments:

Golden Rules.... a Treaty of Respect

Here in NZ we tend to cover The Treaty of Waitangi each year as we work together to establish our classroom rules. Invariably, we end up coming to an agreement and each child 'signs' it to show that they will support and uphold what they have discussed. Each year, I inwardly groan at how boring my class treaty always ends up looking. That is, until I came across this .jpg on Pintrest. It got me thinking... perhaps we could create a set of 'golden' rules.... rules that are displayed around a sun... and the rays of the sun were our handprints... and our handprints were our pledge to uphold the rules. I pitched the idea to the kids and they LOVED it. Each day we painted large sheets of newsprint in a messy, Eric Carle kind of way. Just pour the paint straight on the paper and get the kids to go mad. Geez, it was fun! I have since learned a good lesson: don't use newsprint. It's too flimsy. Go for something a little thicker. With a little help I got the background and sun hung on the ugliest section of the classroom I could find. It's up high, it's ugly and it is otherwise un-useable. Win-win. We typed up the rules we decided on and added them to the mural, along with clouds and our handprints (which we signed with a sharpie). I had HEAPS of blue paper left over in a slightly different shade. So I used them to cut out the letters across the bottom. In case you can't see, it says: "We understand that in RM15...". All rules are phrased in a positive manner. I believe that this is really important. Nobody likes to hear what they CAN'T do... lets tell them what they CAN DO!

We are now working on unpacking our rules to see what they actually look like in practice. Each day we re-cap our rules and talk in depth about a new one. Each day I look up at our class mural and do a quick round of 'jazz hands'. I am in love.
Posted by MissEdwards at 8:48 PM No comments:

In the beginning, there was.... Math

So at my current school we begin each year with a mini 'about me' unit. We look at our community, our rules etc... and usually link Math in through Stats or Measurement. This means by the time they get to me, they have already charted their heights, eye colours, fav food, etc before. Been there, done that, Miss. We want something different. Yesterday I gave each child a handful of pom poms each. You want to get a child interested in Math? Try pom poms. Totally focussed and on task, we set about sorting the pom poms into categories. Most children went for the standard- colour sorting- to begin with. 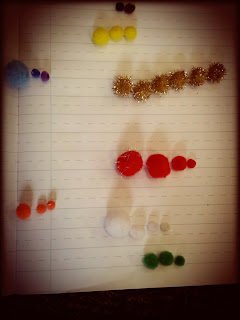 Then we began to talk about other ways to classify our pom poms; size and sparkly v.s. non-sparkly were other popular possibilities. At this point, I want to say that I needed to model the sorting on the board- identifying common attributes and sorting data was the focus of the lesson. I made a mental note to glue some pom poms onto magnets for future lessons. Today I gave them each a scoop of pom poms and we sorted them quickly in a couple of different ways. I then asked the children to sort by colour and we learned about using tally marks to record our data. They really liked the idea that the fifth tally mark 'wraps' its arms around its group to make a tidy bundle. We then recorded our own data on our own tally charts. 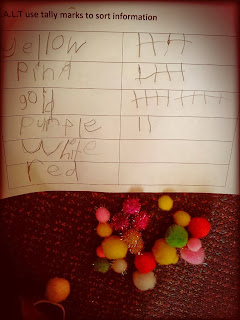 Tomorrow we shall revisit sorting and tally marks, with a final destination of making our own block graph (which has already been introduced through our 'favourite food' and 'number of letters in our names' graphs from last week). Annnnnnnnnnnd... once we have achieved the dizzying heights of a block graph, we will repeat it all again. This time, with buttons. Because if there is anything the children like as much as pom poms... it has to be buttons. I plan on setting this up as an independent activity in their Math tumble. I will provide a variety of objects to sort (pom poms, buttons, toy cars, little crafty wooden bits and some wooden shapes), with some blank tally charts and grids for block charts. Lofty ambitions, I know. But we all need to dream.
Posted by MissEdwards at 10:14 PM No comments:

And in the beginning there was...

It is the start of a brand new school year in lil ol' NZ, and for the next few posts I am going to give you the grand tour of my classroom. I am beginning the round with my new school hat storage system... it has made my life so much easier, and was quick and simple to make. 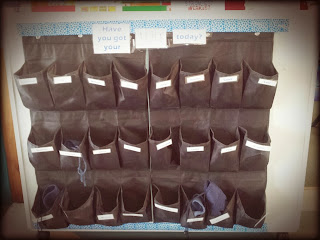 I bought two over-the-door-shoe-organizers from K-Mart for $8.00 each (just in case you are wondering, there is 16 pockets in each organizer). These were stapled to the back of my class library shelves. Top tip- use the staple gun at an angle. It makes it way easier to get the staples out later if there is a little gap at one end. I chopped off the bottom rows, as they were not needed, and ran a quick strip of patterned duct tape across the top and bottom (before running out). I then added laminated name labels (stapled on) and a sign. Quick, cheap, and easy (wink wink). I love it because I can see at a glance who doesn't have their hat at school today, and their hats are no longer scattered around my classroom. The children love it because it gives them somewhere to park their hats and they love having their own pocket. I have a running deal with them- if all hats are parked in the pockets before school, they collect 5 marbles for the jar. Most students now leave their hat at school overnight- so they are already prepared for the next day (so cute). This is definitely a system that is here to stay!
Posted by MissEdwards at 10:53 PM No comments: